It’s their fault, or is it? 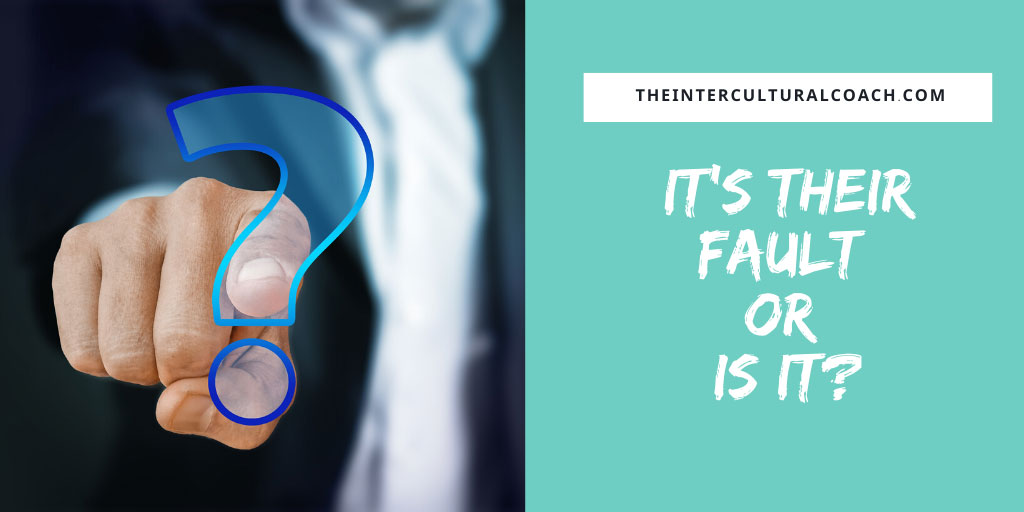 I became interested in culture as I witnessed and experienced time and time again people pointing the finger of blame at others for their failures to connect, achieve results, perform.

Despite the extensive research and advise on overcoming cultural differences we often end up doing the same thing over and over again like the hamster inside the wheel. It is always somebody else’s fault, they don’t know what they are doing. They are impossible to work with. They don’t respect deadlines, to mention just a few.

The emotions range from mild irritation to frustration and rage. You are the victim of an injustice and that injustice is all their fault because they refuse to do things your way, the right way.

The problem with anger is that this is the symptom but what is the actual cause? Anger as an emotion is a natural reaction to a perceived wrong and it is always directed at people. Great, I hear you say. So how does that help me or my team overcome the hurdles we encounter with international clients or colleagues?

The thing is that we often interpret reactions incorrectly. Think about it. Your manager, Michael comes into your office, refusing to work with an overseas client’s implementation team. You tell him to get over himself and find a solution. Leaving him feeling even worse as he now adds disappointment due to your lack of support to the negative emotions he was already experiencing.

The end result is that even if he does sort it out, it takes so much longer and you still end up being dragged in to fix things. The trust you had painstakingly established with your client is damaged and you have lost so much time cleaning up the mess.

It’s the perfect loose:loose scenario, everyone is right and nothing gets resolved. The kind of problem that will reoccur again and again like a scene from “Groundhog day.” But what the heck, that’s what you are there for. You are the hero and nobody can sort things out like you can. After all what else do you have to do?

But what if you had Hermione’s Time Turner? What if you went back in time and the conversation went something like this?

“How do you feel Michael? I am so angry with Sven and his team. Tell me what happened? We were working on the next phase of the project but because we hadn’t followed the protocol to the letter, they refused to test it. What was going on when you became angry? My team worked all night so we could deliver the latest update on time. They are exhausted. They are doing their best? What was it about Sven’s response that made you feel this way? We are delivering what they want but they are more focused on the process than the result. How can I help?”

In the end the anger wasn’t anger but overwhelm and a lack of understanding on how culture can impact how we do things. The different strategies to the project meant that Michael and his team assumed that a results focused approach was what Sven and his team wanted to. Once the real cause was identified it was easier to find a solution that worked for both.